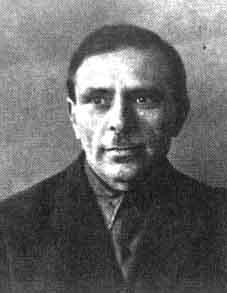 Viktor Belash was born in 1893 in the village of Novospasovka (Ukrainian form is Novospasivka) in southern Ukraine. Novospasovka was also the home of other anarchists who later participated in the Makhnovist movement like Vassili Kurilenko and Vdovichenko. He received an elementary education and worked as a railway engineer. He was already an anarchist communist in 1908 at the age of fifteen. He arrived in late 1918/early 1919 in Gulyai Polye to link up with Makhno. Here in consultation with Makhno and other partisans, Belash was given the task of organising a congress of military re-organisation. He was elected chief of staff of the Makhnovists on January 3rd at a congress at Pologi with over forty delegates. Belash was acutely aware of the need for better military organisation . The troops of the White general Denikin murdered his father, his grandfather and his two brothers and burned all their property as revenge for Viktor's involvement in the Makhnovists, according to Arshinov, though Skirda states that it was Austrian forces who murdered his father, grandfather and cousin. As Arshinov says "He was a member of the Council of Revolutionary Insurgents, and a skillful military strategist. He elaborated all the plans concerning troop movements and assumed responsibility for them".

After Makhno was forced to retreat over the border with Romania on 16th August 1921, as the result of multiple wounds, Belash directed operations against the Reds in his absence.

He was captured by the Bolsheviks on September 23rd 1921, after being heavily wounded in battle at Znamenka. He was imprisoned in Kharkov prison, where he was sentenced to death. Whilst in prison, he was encouraged to write his memoirs by the Cheka, which he was able to do in great detail with the help of his military notes and campaign diary. He filled three large exercise books with these memoirs. Extracts from these appeared in Issue 3 of Letopsis Revoliutsii (Annals of the Revolution) No3, May-June 1928 with many text changes by the Soviet censors. Released by the Soviet government under an amnesty in 1923, he was banished to Krasnodar in the Kuban region. There he worked as a mechanic for the Hunters Union. In December 1937 during the mass purges of Stalin, he was arrested and put in front of a firing squad the following year. He was posthumously rehabilitated on April 1976 for "insufficient evidence".

His son, Alexander, a World War Two veteran, was able to obtain the manuscript of his father's work from State archives and published it, with other previously unknown documents, in 1993. It has proved, with its minute details, to be an extremely valuable source on the Makhnovist movement, though it should be read with caution, with the realization that Belash was writing in coded form, and was protecting Makhno and other partisans who were still alive. The military successes of the Makhnovists were in great part due to the organizational capabilities of this anarchist worker.