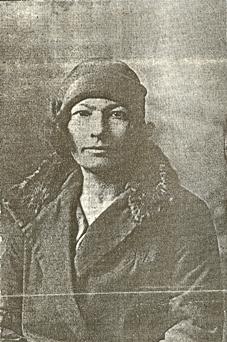 A biography of Polish-born anarchist Leah Feldman, nicknamed the "Makhnovist Granny", who tirelessly devoted her life for the cause of working-class emancipation

Leah Feldman, who was cremated in London on January 7th, 1994 was one of the ordinary men and women who rarely get into history books but have been the backbone of the anarchist movement.

Born in Warsaw in 1899, as a schoolgirl she became interested in anarchism. She said that her mother used to hide her shoes so that she could not attend meetings, which were then illegal in Poland. Finally she ran away to her sister in London where she earned her living at the sewing machine.

Working in the sweatshops of the East End she became active in the Yiddish-speaking anarchist movement that flourished at that time. When the Russian revolution broke out in 1917 the overwhelming majority of Russian male Jewish anarchists returned home. Many of those women whose husbands and lovers died at the hands of the Tsarists or the Bolsheviks, remained in England. The Jewish (in the sense of neither racial or religious but Yiddish-speaking) anarchist movement gradually dwindled and ended with Leah's death in January.

Leah, however, had made her own way to Russia. Upon arrival she saw the reality of Bolshevik rule and was not impressed. As a working woman she could see the effects of their dictatorship in a way that visiting intellectuals could not. Before leaving Moscow she attended Kropotkin's funeral, the last permitted anarchist demonstration until the collapse of Stalinism. (In a great display of self-discipline all of the anarchist political prisoners who were paroled for the funeral returned to jail, in the hope that the Bolsheviks would give parole to others in the future).

Leah travelled south to the Ukraine and joined the anarchist Revolutionary Insurrectionary Army led by Nestor Makhno. The Ukranian anarchists fought Tsarism, foreign intervention and then the Bolshevik dictatorship. Though she did not actually fight (some women who could ride horseback did) she joined the train that followed the army and prepared clothes and food for the orphans and strays they picked up everywhere.

When they were defeated in 1921 she got out of the country by changing her nationality through a marriage of convenience to a German anarchist. They did not meet again. She made her way to Paris and then back to London. There she acquired British citizenship by another marriage of convenience, this time to a derelict ex-serviceman who was paid £10 for his services. They did not see each other until many years later Leah received an official communication that he was in a geriatric hospital. She used to visit him with presents of tobacco.

Before World War II she travelled to Poland and Palestine, working her way to both places. In Palestine she organised a federation of anarchists. One surprise was meeting her old friend Paula Green, who had been pressurised into marriage in Russia, so had chosen an atheist zionist with whom she was in love. Paula knew he was active in Labour politics but thought it impossible that he would ever be in government as he thought her ideas impossible.

Green changed his name to Ben Gurion and became the first prime minister of Israel. His wife did not leave him but she never once took part in any public functions with him. She remained a still believing, if passive, anarchist.

When Leah returned to London at the end of 1935 she helped raise money for the German sailors who organised an anti-Nazi resistance group in the 1930s. She also did tremendous work for the Spanish anarchist movement when the civil war broke out.

Leah was a member of a working group of immigrant anarchist women in Holborn ever since 1939. How, with the confusion of tongues - broken English, Yiddish, Polish, French, Catalan, Spanish, Greek Cypriot and Turkish Cypriot - they understood each other was a mystery to many. But they managed.

Leah had to give up work when her eyesight went after an operation. She was completely blind in one eye thereafter and increasingly so in the other. She used her free time to help the movement she had given her life to. In the 1960s she smuggled arms into Spain for the fighters who had continued resisting the Franco regime since 1939. The Catalans, who are prone to giving nicknames, christened her "la yaya Makhnowista" (the Makhnovist granny).

Her last years were sad. Not only were all her family and her early friends dead, there was nobody left with whom she could talk in her own language. But she never gave up. She still supported anarchist meetings and always attended the annual London Anarchist Bookfair when her health permitted.

Our movement has been built by working women and men like Leah. It is right that we do not forget their contribution.

Thanks to Leah's friend Albert Meltzer and to the Kate Sharpley Library for information about Leah's life.